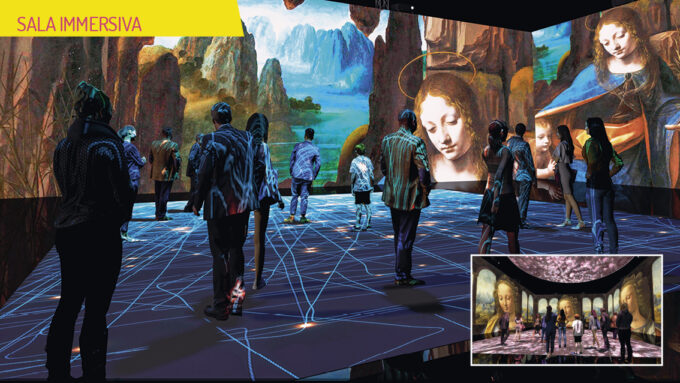 The catalogue entitled ‘Leonardo da Vinci 3D’, concerning the exhibition which will take place in the Fabbrica del Vapore (Milan) from the 30th of May until the 22nd of September 2019, displays to the big audience the work and the thinking of Leonardo in an original way. In fact the exhibition not only counts on a highly technological support, but also on a specific method, thought in order to captivate the observer: the “immersive” strategy. The visitor finds himself totally “immersed” in the show in front of his eyes and becomes its main protagonist, substituting in this role that of the art work. The expression coined to reveal this experiment at the same time faithful to tradition and avantgardistic, that is ‘edutainment’, where in a single word coexist the words ‘entertainment’ and ‘education’, summarizes properly the basic intention of this initiative: that of making the viewer live the art rather than simply recognize it.

The catalogue, introduced by the prefaces of the promotors of the initiative (the Vicesindaco of Milan Anna Scavuzzo, the President and Vicepresident of Medartec Distribution, respectively Roberto Luciani and Enrico Cristiani, and the representatives of Art Media Studio Vincenzo Capalbo and Marilena Bertozzi), tells the different ‘souls’ of Leonardo (Leonardo as painter, as engineer, Leonardo in Milan…) through a composite illustration of his works.