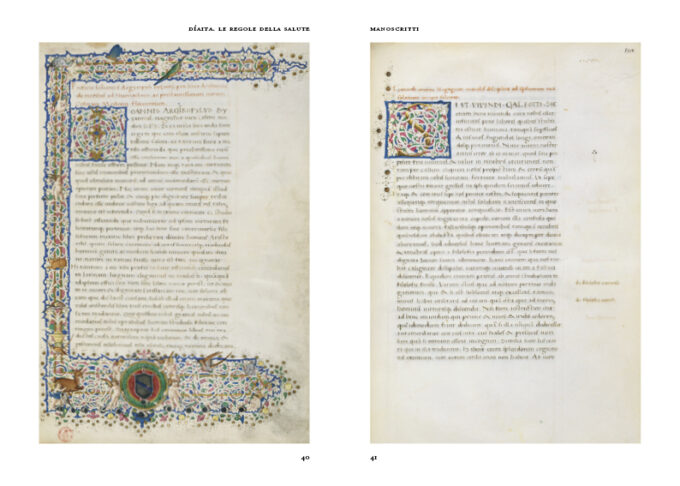 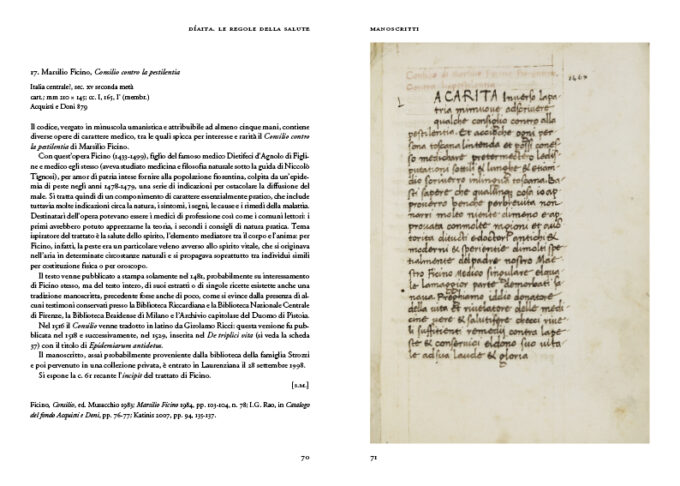 In another of the exquisite Library on Display series of exhibitions, the Biblioteca Medicea Laurenziana has organised an original itinerary in medical literature and philosophical treatises, through finely illuminated manuscripts produced for illustrious patrons.
The exhibition includes the Corpus Hippocraticum, with the De diaeta treatise, and Galen’s writings, but also Ficino’s translation of Plato’s Dialogues, Aristotle’s Nicomachean Ethics as translated by John Argyropoulos and Epicurus’ famous Letter to Menoeceus. In the same way, the culinary suggestions in De re coquinaria by Apicius are accompanied by Seneca’s Letters to Lucilius and Plutarch’s precepts. There are a number of medieval works from the Arab tradition and texts that descend from the tradition of the famous Salerno medical school, Trotula’s Regulae medicinales (dedicated to women’s health and cosmetics), the Physica by Hildegard of Bingen, writings by physicians of the 13th and 14th centuries such as Aldobrandinus of Siena, Taddeo Alderotti (cited by Dante in the Divine Comedy) and Barnabas of Reggio. Encounters from the 15th century include Benedetto da Norcia, physician to Bianca Maria Visconti and Cosimo de’ Medici the Elder, and Bernardo Torni, physician to future pope Leo X, Giovanni de’ Medici.
A special chapter is dedicated to writings about the bubonic plague, in particular Consilio contro la pestilentia, written by Marsilio Ficino in response to the epidemic that raged in Florence between 1478 and 1479. The neo-Platonic philosopher, in his capacity as a physician following in the family tradition, also wrote De triplici vita, the reference for all successive literature about the melancholy temperament of the saturnine intellect.
The exploration ends in the 16th century with the amiable advice offered by Luigi Cornaro, Venetian gentleman and patron of the arts, in his Discorsi della vita sobria.